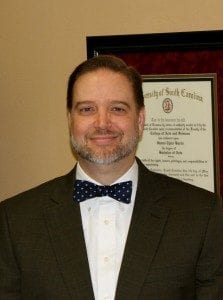 Robert J. Reeves has been litigating on behalf of clients as a trial attorney for more than 25 years. He learned the importance of hard work and fair play while growing up in Valdosta, Georgia, after being born in Atlanta. Those traditional Southern and small town values prepared him for his future calling as a litigation attorney. Mr. Reeves attended Valdosta State College after high school. There he prepared to transfer to a nursing program. In 1984, he graduated from the Medical College of Georgia with latin honors. After working as a nurse briefly, Mr. Reeves enrolled in the University of South Carolina School of Law. He received his Juris Doctor (JD) in 1989.

Mr. Reeves then began his career as an insurance defense lawyer. Since then, he has worked with individuals on both personal injury and workers’ compensation cases. He has also represented criminal defendants in both Carolinas. Mr. Reeves is now included in the National Trial Lawyers Organization’s Top 100 Lawyers and South Carolina Super Lawyers. And he will use that expertise and experience to represent you in your Rock Hill divorce law needs.