Prenuptial Agreements: Killing the Taboo and Protecting Both Spouses

In a world of divorce, shotgun weddings, and spouses in it for the wrong reasons— prenuptial agreements have gotten a reputation. These agreements are often seen as a way to prevent one party from taking the other for “all their worth’, and running off into the sunset. But, they’re actually a great tool for protecting both spouses in the event of a separation. Gone are the days where prenuptial agreements were reserved for the rich and powerful. But, arguably the most difficult part of getting one of these guys set into place— is asking for it. No one wants to start their marriage off by thinking about it’s end. But, this can be a responsible move for you and your significant other if you do it respectfully, and in a business-like fashion.

Prenuptial Agreements: Killing the Taboo and Protecting Both Spouses

When and How do I ask for a prenuptial agreement?

The answer is simple… early. If you meet someone, and know that you’re going to marry them— bring up the prenup as early as possible. Some couples will discuss this two months into a relationship, or some might try to spring it on you on your wedding day. Obviously, the latter is not going to go over too well. Therefore, if you know that you love someone enough to life your life with them, this discussion can be healthy and logical for both of you.

Don’t pose this as protecting your assets, but protecting both of you and crafting a ‘what if’ plan of attack 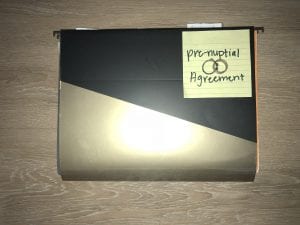 Divorce can get messy, and angry. Therefore, having a plan such as this in place, can take out a lot of the guess work which, let’s face it, can get spiteful. When you bring up the idea of a prenup, bring it up as a means of saying, “you have things you would want to protect, and so do I. So, can we discuss the mutual benefits of a prenuptial agreement sometime soon?” Make the discussion important, without backing your partner into a corner. But, be understanding and patient with their ill-will. There is an understandable taboo that comes along with prenuptial agreements. Until you can make your to-be spouse understand the mutual benefit— the idea can be upsetting.

Take into consideration things that were yours before the relationship, and things you have built together

Anything you create together, such as a home, a business, or anything of the like— you should share accordingly. However, say you and your spouse both run successful businesses, and have before you ever knew each other. Those things might be worth considering for a prenup. Think about it— this thing, whatever it is, is your baby. You built it on your own. Therefore, giving a portion of that hard work to an ex-spouse would be gutting.

A marriage is a partnership, but divorce can become war

We’d all like to think that if it came down to it— we could amicably part. But, that is just typically not the case. So, having something in place to ease the uncertainty if that time came, can help your marriage start on solid ground. There’s no guesswork, there’s no fear of separation due to losing your assets. Rather, you can enjoy your marriage.

A prenup can be that easy if you let it. Draft it together, make decisions while you’re in a good place together, and then move on. Don’t let a prenup define your marriage. Use it as a means of collaborating on the first step towards spending your life together. it’s only bad if you let it be!